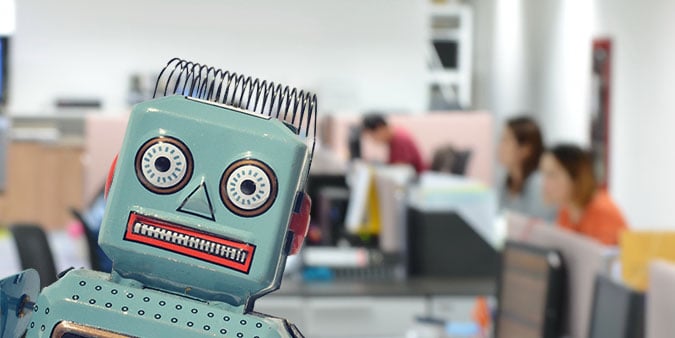 Could you lose your job to a robot? In an earlier post, I wrote about 10 Ways to Foil a Robot, which I hope was inspiring and optimistic. In reality, artificial intelligence is yet another tool for knowledge professionals—an arrow in the quiver.

How much intelligence is needed to operate an automobile?

If you ask around, I think the consensus is “not much.” Some people say that an IQ north of 80 will get the job done. That said, I know a lot of people with really high IQs who should have their licenses revoked.

In ten years or less, there will be thousands of self-driving cars on the road. Will they be better drivers than us? If so, will it be because they are smarter—or because they follow the rules?

How much intelligence is required to be a librarian?

My doctor once told me he could teach me how to change my wound dressing.

I responded by explaining that I could teach him how to program a computer. I’m sure we could have taught each other a thing or two, but what would be the point? I think my doctor believes computers are as yukky as I think gaping wounds are, because neither of us has switched careers.

Most knowledge workers work support others with post graduate educations, such as doctors, lawyers, scientists, and engineers. While these people may be capable of learning how to do their own research, that would only take time away from their area of expertise.

Artificial Intelligence can help knowledge workers—but it can’t replace them.

AI and Big Data are like peanut butter and chocolate. They belong together, but they’re not going anywhere on their own that they haven’t already been. Not yet, and not for a long time.

Yes, we can slice and dice data like we never have. We can even train a big computer to win at Jeopardy. However, for that to happen, all the answers and all the questions need to be contained within a predetermined data set. From this stew of questions and answers, an AI “worker” can guesstimate multiple possible answers and then assign probabilities to each.

This strategy is similar to counting cards in a poker game. You can make a good guess about your opponent’s hand based on what’s in your hand, already been played, or visible on the table. To be successful, you must know when to bet a little or a lot. However, you never know the answer until the hand is over. Real life research isn’t like that. You either know, or you don’t—and then you keep looking.

Put this in your search engine.

So yes, AI will make it easier for everyone to search for information—just as the Dewey Decimal system, card catalogs, microfiche readers, and search engines have done for each generation of researchers. And just as in the past, when you want to “see what else is available,” or “what’s the best source for information on…?” you’ll find a knowledge worker who has expertise in a specific field and ask them to answer a question like, “Why does my brother annoy me so much?” By the way, I’m thinking 306.875.